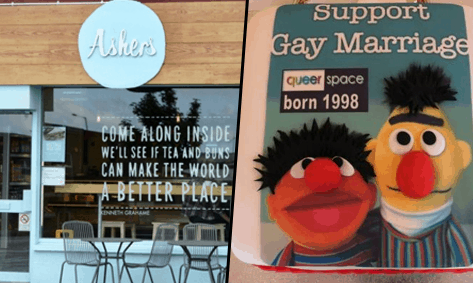 For those of you following the case there has now been a judgement made on the Asher appeal in Northern Ireland. This case has become a beacon for gay rights in the country and speaks to the tolerance of a nation. It has inevitably generated heated debate on both sides and was the subject of an equally heated debate in a recent learning set I ran on tolerance in the NHS.

For background – Gareth Lee went into Asher’s bakers and asked for a cake decorated with a picture and slogan supporting gay marriage. The bakers refused on the basis of their religious beliefs and court cases ensued. On the face of it this may be a very clear case of discrimination but there is another angle (best described here – the author is no relation! https://publictheologydotnet.wordpress.com/2016/10/23/the-great-northern-irish-bake-off/comment-page-1/

This raises a much more vexed issue of what we mean by tolerance and how that is enacted in our society and within the NHS. How do we balance displaying respect for cultures, beliefs, habits and faiths that may differ from our own views – with a desire to promote equality and freedom of speech and thought? The counter view expressed in Peter Lynas’ piece is that the Asher case wasn’t about discrimination to an individual, but about denying people the right to express and exercise their own thoughts and beliefs. The difference is hugely material.

In a learning set I facilitate with a group of amazing senior leaders, everyone of whom I would argue beautifully embodies the values we hold dear in the NHS, the discussion became extremely heated. One of the issues we discussed concerned a small team with a diverse membership including an openly gay man and a very devout Muslim woman. Tensions between the two had become so strained as to affect the whole group with the main issue being how do you create an environment where his views as a gay man and his freedom to discuss issues that mattered to him were balanced against her views as a Muslim woman and her concern about being engaged in conversations she found distressing and inappropriate. With the help of the group the woman who presented the issue came up with an elegant solution. I am sure you have a view. And whatever side of the debate you are on isn’t the issue really in this short piece, it is about how we get beyond rushing to judgement and instead take time to look at these matters of personal value more meaningfully.

The extent to which we open ourselves up to hear, be curious and be concerned about different perspectives I think impacts hugely on our ability to truly demonstrate tolerance in a way which best serves our diverse communities. Rushing to judgment is easy. Opening your ears, eyes and heart to difference is always harder than we first imagine. Of course these differences are what makes us human and special. It is just that the reality of embracing that difference inevitably means including differences that offend, disturb or cut across our own beliefs. Really effective leaders indeed move beyond mere tolerance to a genuine acceptance and embracing of those differences however they present themselves. Managing the reality of that in your teams and organisations means addressing these issues head on and with confidence. I applaud those who do it well.

I run three learning sets per year. If you are interested in joining one please contact me.